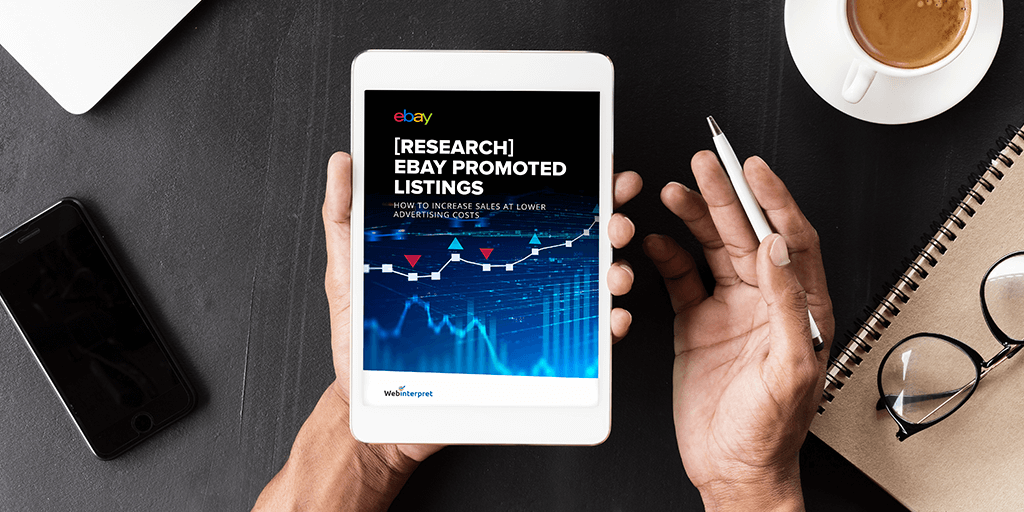 How to increase sales with eBay Promoted Listings at lower advertising costs? [Research]

This article is to help eBay sellers optimize their revenue and benefit from advertising (Promoted Listings) while keeping costs under control.

Did you know that with ad rates recommended by eBay, Promoted Listings can cost you 2-3 times more while not bringing additional revenue? So how to sell your products online more successfully?

Poor understanding of how Promoted Listings and bidding on eBay work can result in sellers spending much more than needed on ecommerce advertising. It may not bring the desired ROI, either. One of the questions is when to go for safer or more aggressive bidding.

The subject of the study conducted by Webinterpret was the relationship between ad expenses (ad rate) & sales increase and its impact on eBay Promoted Listings’ bidding strategy.

The following research & 5 key takeaways are based on an analysis prepared by Adam Harasimowicz, Data Scientist and Product Manager at Webinterpret. 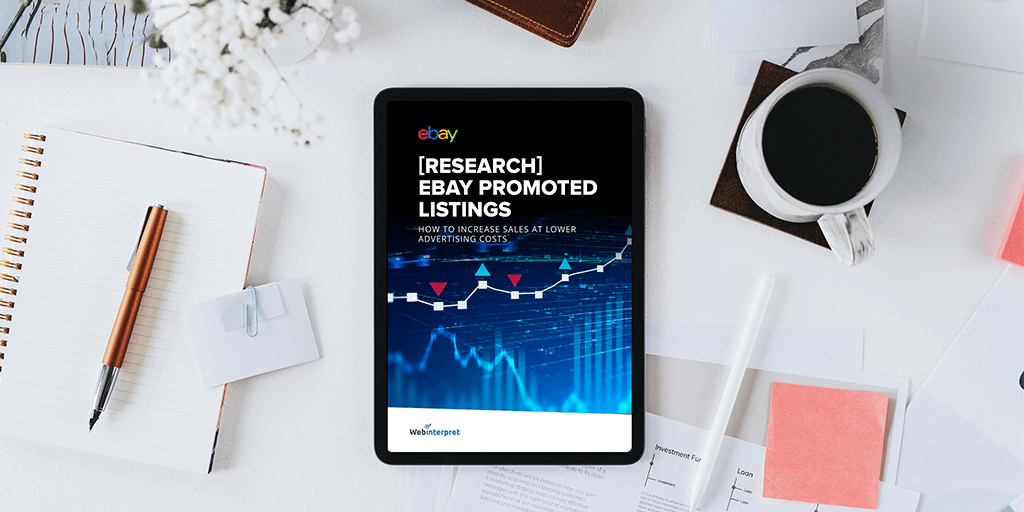 Download a FREE PDF version with the full eBay advertising research for easier reading and sharing with coworkers.

In the experiment, Webinterpret analyzed the performance of Promoted Listings on international eBay markets. We tested different approaches and experimented with different ad rates (recommended by eBay and lower). The goal was to define the optimal ad investment to help sellers optimize their revenue and ROI.

Below you’ll find major findings, recommendations and takeaways from our study*.

*The information, data and guidance provided in this whitepaper is for general information purposes only and does not constitute professional advice. For more detailed information and updates about Promoted Listings, we encourage you to visit eBay’s website.

Interestingly, ads have a much lower CTR (click-through rate): up to 10 times lower than organic results. However, the good news is that when potential buyers have already clicked the ads and are browsing the product pages, the sales conversion rates are comparable to the traffic acquired organically. 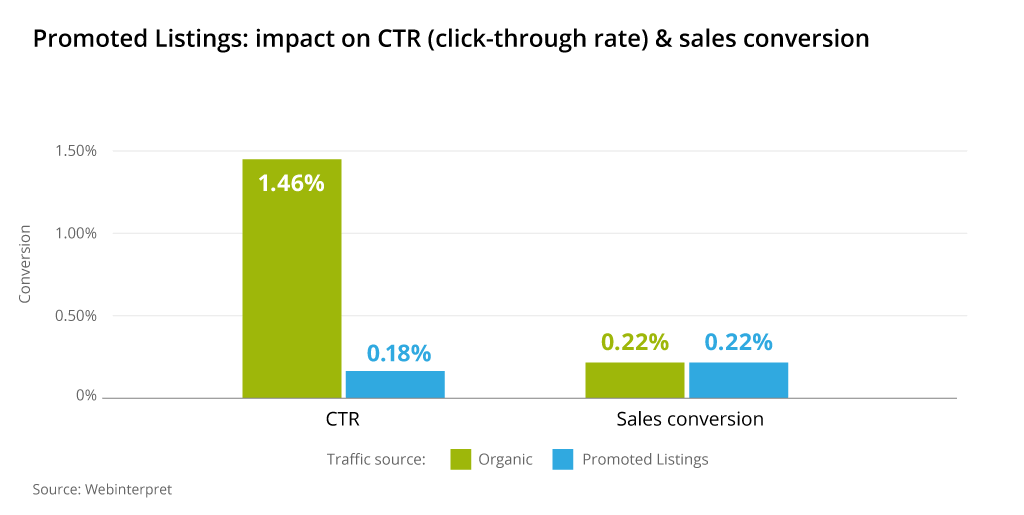 In general, German online buyers are less likely to click on listings, be they ads or organic results. US buyers, in turn, tend to click more often, so CTRs for both ads and organic results are higher.

Interestingly, despite the typical behavior of Germans, their share of clicks on Promoted Listings is bigger than in the US. The attitude of US buyers towards clicking on ads turns out to be more skeptical compared to clicking items from organic results.

German buyers seem more likely than US buyers to click on ads. The proportion between sponsored click rate and organic click rate is 17% higher than in the US.

Further observations based on our analysis:

#3 takeaway: ad rates (expenses) depend on the country & time

Based on our analysis, here’s a number of observations about ad rates: 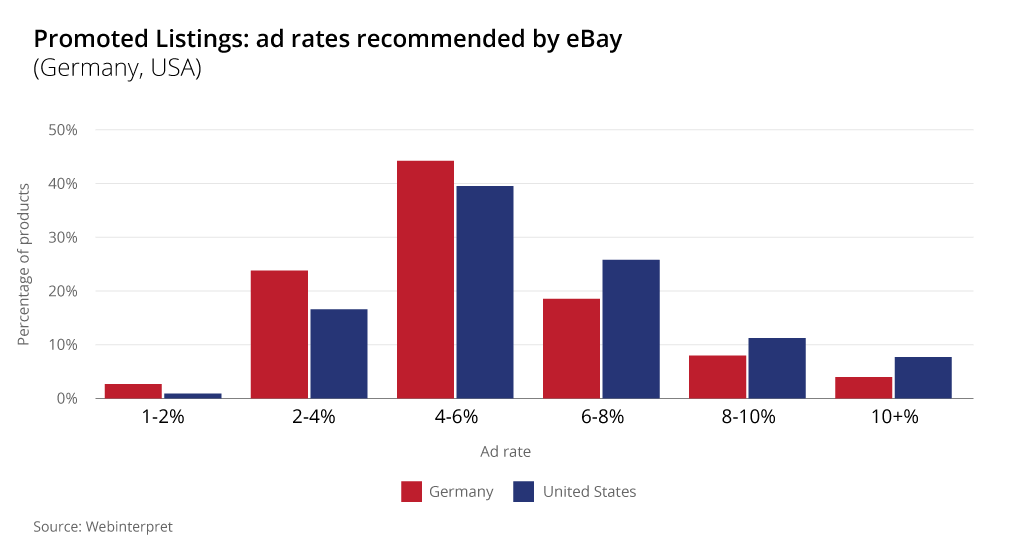 Ad rates differ between sites/countries and over time:

According to our tests:

Promoted Listings increased international sales in Germany by 35% and in the USA by 54%. This happened at advertising costs 2-3 times lower (safe bidding strategy) than rates recommended by eBay.

By bidding higher (often at the rates recommended by eBay), many sellers can increase their sales even further (+80%). However, the reality is that with a good bidding strategy, similar results can be achieved at 30-40% lower costs. 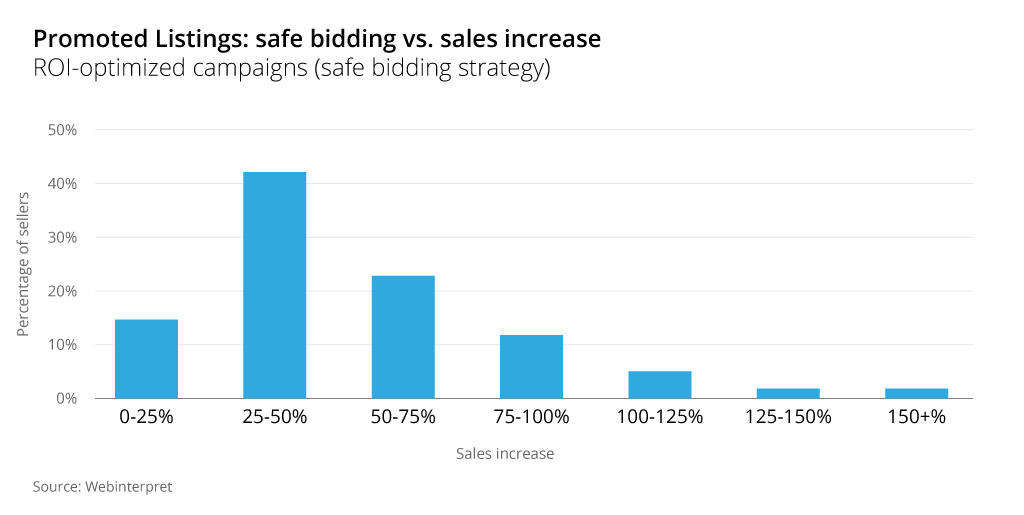 The goal of ROI-optimized campaigns is to bring maximum sales increase while decreasing costs.

In some situations (depending on which item is promoted and at which rate), organic sales (achieved without ads) can be partially cannibalized by the paid ones.

For example, if advertising helps your product get a slightly higher position in search results (let’s say position 5 instead of 6), then transactions will be charged with an ad fee: even if most sales would have taken place without promotion. This also speaks in favor of a safer bidding strategy.

Luckily, overall, the cannibalization of organic sales by the paid transactions is rather marginal. However, the situation may differ between sellers and products. Thus, it’s beneficial to have an automated mechanism for campaign management that would deactivate ads when they’re not needed. 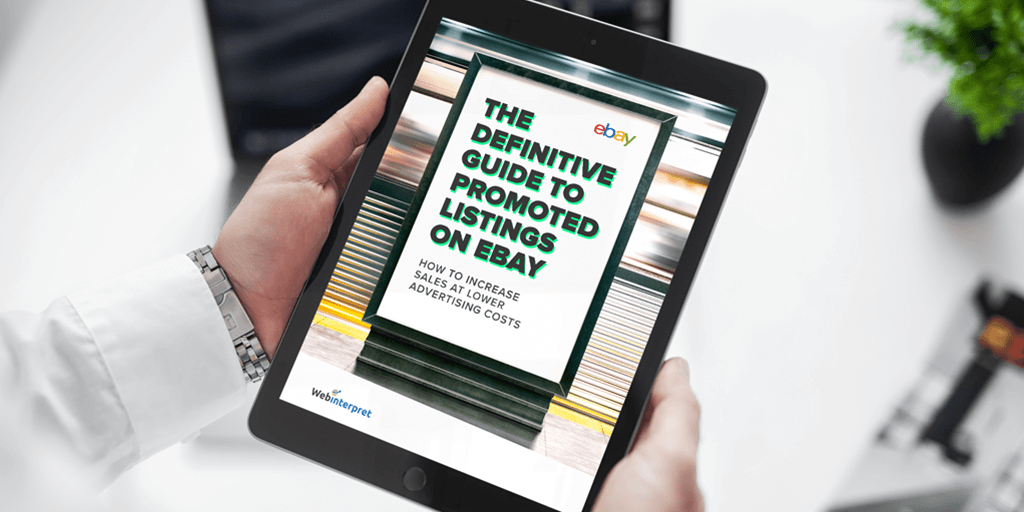 According to numerous online sources, articles and YouTube videos, sellers should promote items at the minimum rate of 1%. This makes some sense.

First, promotion is better than no promotion. Promoting items at the 1% ad rate gives you an advantage over sellers not using Promoted Listings. Second, due to high costs it’ll be more cost-efficient than following ad rates recommended by eBay.

However, the number of merchants going for the minimum rates (1-1.5%) is high. If you choose the same approach, it’ll be difficult for you to stand out and gain a competitive edge.

To top it off, we feel intuitively that there’s something off about using the same ad rate for all product types. Data confirm it. 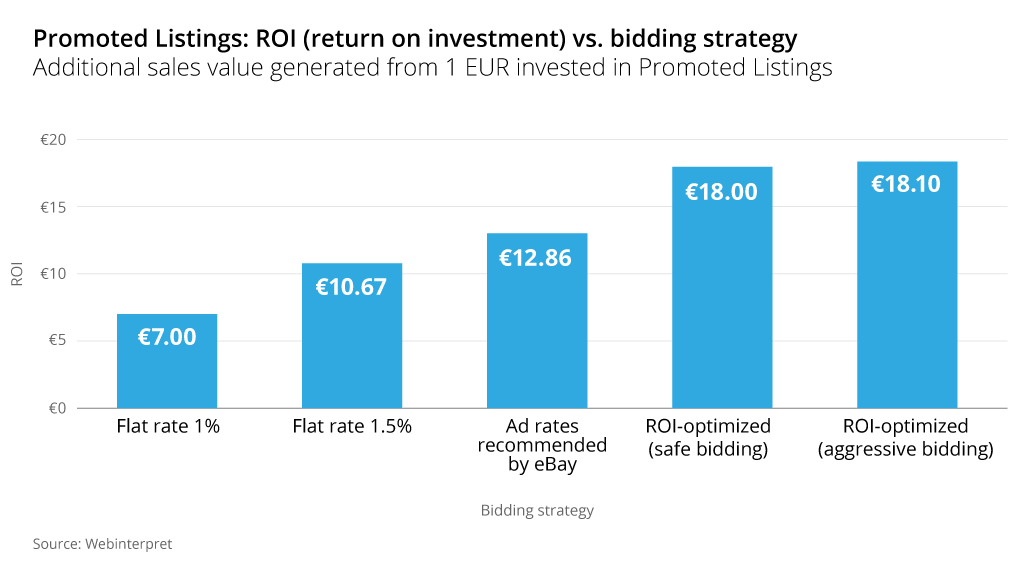 Often it’s not about a safe or aggressive bidding strategy, but the optimal one.

Sellers should regularly adjust their bids due to the changing ad rates of other sellers, e.g. higher bids during the Christmas season.

In both situations, the key is to find the right balance: avoid both overpaying for promotion and excessive cost-cutting. In the latter case, you may lose many potential transactions. Finding sweet spots is much easier when you have data and you can detect patterns at scale.

eBay Promoted Listings’ advertising model is very seller-friendly due to the possibility of using both PPS and PPC models.

It’s worth trying eBay Promoted Listings due to increased sales potential. Finding the balanced bidding strategy is the key.

If you have questions about our findings/research or would like to discuss your Promoted Listings’ strategy, feel free to contact our cross-border experts. If you’re (considering) using eBay Promoted Listings, we can provide you with the necessary support so you can maximize your revenue whilst minimizing your advertising costs and efforts.

Adam Harasimowicz, Data Scientist and Product Manager at Webinterpret, is an expert in data analysis and machine learning. He’s gathered his professional experience over 8 years of working in Poland and the UK. Currently, he leads the Data Science Team at Webinterpret and focuses on building ecommerce products which leverage data. In his private life, he is a passionate traveler, skier and sailor.

Looking for support with your Promoted Listings strategy?

Top ecommerce ebooks for 2021: FREE downloads from Webinterpret
How to set up an eBay store: key facts & FAQs
How to sell successfully on eBay: 5 tips