Expand into Austria: the ecommerce market with amazing sales potential

Have you considered selling your product online in Austria? To find out more about this marketplace, read on. In this article, we’ve compiled some facts and stats about the Austrian online market, buyers and cross border trade opportunities.

It may be classical music and Mozart or beautiful old buildings in Vienna. It may be well-known Austrian brand names, such as Red Bull or Swarovski. Or some of us may feel tempted to think .. kangaroos and … Australia.

Austria is a German-speaking country located in the very centre of Europe. Austrians can enjoy a pretty decent standard of living in their rich land. This works in favour of eCommerce opportunities for online sellers.

In other words, as a rule it should be easy to deliver to Austria and its inhabitants have the financial resources to buy products online in big amounts. Additionally, the Austrian marketplace can be characterised by high Internet penetration and good infrastructure.

And here’s another thing…

If you already know the eCommerce marketplace in Germany, you may be able to apply this knowledge to other German-speaking online markets.

Due to linguistic similarities and geographical proximity, Austria and Switzerland tend to buy eagerly from Germany.

However, … stay alert! Even though those three marketplaces can be similar in many respects, there are actually differences between them. By assuming all German-speaking online markets and buyers are the same, you may risk receiving some bad feedback.

So… interested in selling your items to the Austrian online buyer?

Austria is a country with a modern and dynamic industry. It can be characterised by a perfect geographical location and economic, political and social stability. Its population is rising, mainly due to immigration.

The country is home to over 8 million people and around 5 million eCommerce users. It is ranked by the World Bank GDP as the 23rd richest country per capita rankings.

Internet penetration in Austria is now at 76.7% and is expected to reach 79.6% by 2021. Smartphone penetration is almost 60% and should reach 73.4% by 2021. It’s worth mentioning that Austrians go along with the mobile trend. Even though the population is fairly small, there are strong mobile network operators.

Statista gives more numbers and data regarding the marketplace:

The online buyer in Austria

To start with, the Austrian society is versatile in terms of age, social classes, culture and the cultural background of the people. It’s worth noting that the elderly population is growing at a fast pace.

Interestingly, older online buyers also have money for online shopping so bear this segment in mind when selling in Austria. If you think technology is restricted to younger generations, you’re in the wrong! The older segments of the so-called silver surfers are getting more and more tech-savvy.

When it comes to gender distribution, as of 2016, there are more male than female online shoppers. Males aged between 35 and 44 form the biggest market share.

According to Ecommerce Foundation and Statista (2016), popular product groups are: 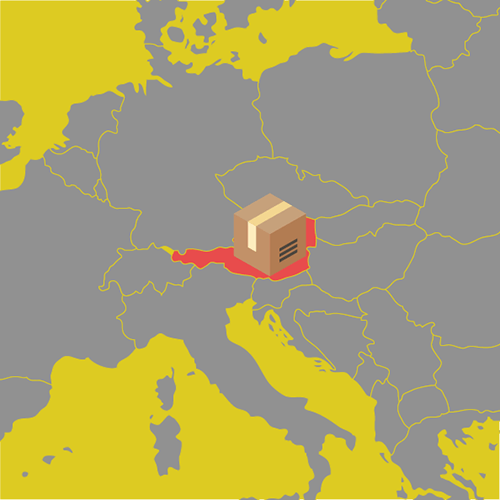 In terms of logistics… Austria is located in the very heart of Europe. Hence, historically, culturally and geographically it links Western and Eastern European countries.

According to World Bank Logistics, Austria belongs to the easiest countries to deliver to in the world. More than half of the population live in urban areas, but good infrastructure is also in place in rural regions. This is an undeniable advantage when it comes to eCommerce.

In terms of payment… When shopping online, 81% of shoppers use payment against invoice. 58% use credit cards payments and 41% PayPal. SOFORT, direct debit, cash on collection, cash on delivery and payment in advance are also used by Austrian online shoppers.

Similarly to other German-speaking countries, invoice payment is the most popular payment method in Austria. That’s because in such cases the seller bears the entire risk.

When it comes to credit cards, bear in mind that Diners Card is much more widely used in Austria than in Germany. Hence, give accepting this credit card some consideration. 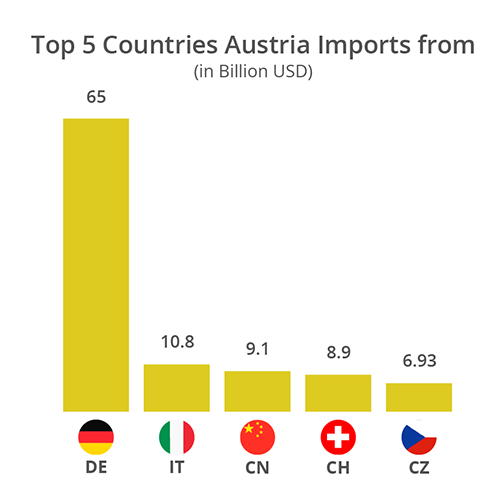 When it comes to online retailers, the number 1 is Amazon. Other e-tailers with a strong presence in Austria include Universal.at, Zalando, Otto or Eduscho.

Is the Austrian marketplace the same as the German one?

The German and Austrian eCommerce markets tend to be perceived as similar or sometimes even identical. Granted, the dynamics of eCommerce and mCommerce are similar in both cases. However, there are some characteristics that distinct one country from another. These peculiarities should be well understood.

For instance, it is illegal for Austrian merchants to charge their clients payment fees. Another example has to do with the cooling-off period, e.g. the amount of time following a purchase when the buyer can cancel their purchase and return the items to get a full return, no matter the reason.

According to German law, Germans can return their purchases within 14 days with no need for explanation. However, the statutory cooling-off period in Austria is only 7 days.

But here’s the catch …

Austrian shoppers are used to buying products from German sellers and the 14-day cooling-off period. So if you want to increase your chances of winning Austrian online buyers, you may be better off giving them 14 days to return their items instead of 7.

On top of legal differences, consider the mentalities of Austrian and German consumers. Austrian shoppers like to order from foreign online shops so they’re used to longer delivery times. All the same, they’re pretty demanding when it comes to customer service.

Austrians expect to be able to contact the merchant free-of-charge on an Austrian phone number. They also prefer to communicate with an agent who speaks … Austrian or Bavarian German. Interestingly, northern German may sound a bit too harsh to some Austrians.

Still, it’s worth noting that…

…trends in Austria are influenced by trends in Germany.

If you see that a product is becoming popular in Germany, you might consider selling or introducing it in Austria in the next 12 months. Do some research and evaluate potential benefits.

Even though German-speaking countries have a lot in common, there are also many differences between them. These may potentially require different approaches and customer policies. Local support and/or a cross-border eCommerce partner will definitely help you come to terms with any country-specific peculiarities you may be confused about.

On the one hand, Austria is the country of Mozart and the waltz. On the other hand, it’s conveniently located with a well-developed economy. This is good news if you consider doing business there.

If you already have experience selling online in Germany, you may transfer some of your best practices onto the Austrian marketplace. However, stay wary: even though these two countries are similar when it comes to the language, culture and eCommerce … Austria and Germany are not identical.

So if you’re thinking of expanding your global sales onto Austria, research local online sales opportunities and the profile of the local online buyer. If you already sell in a German-speaking country, consider potential extra benefits due to country-specific similarities.

Interested in maximising your sales potential and waltzing into foreign marketplaces? Contact us to discuss the free trial!

[FREE ebook] Love and online sales can’t help but grow around Valentine’s Day
7 ecommerce trends on marketplaces to grow your sales in 2021
Top selling items on Amazon in 2021: what to sell online right now